About Us | Congregation Beth Israel 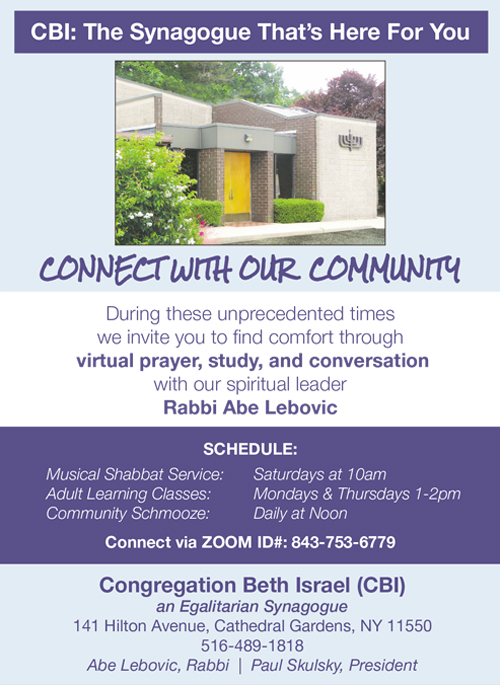 We are a community dedicated to bringing goodness and kindness into the world by harnessing our individual and collective energies, by being accountable to each other and humanity at large. Our goal is to inspire each individual to be a more intentional and compassionate human being using the tools Judaism has to offer.

We believe that Judaism means different things to different people, and we aim to foster a culture that is non-denominational. We are a community that delves deeply into the wisdom of classical Judaism, but which also encourages utilizing other paths to catalyze our Jewish, spiritual journeys.

Most importantly, we’re a community where all are welcome, regardless of race, gender, sexual orientation, and belief system.

Rabbi Abe Lebovic joined Congregation Beth Israel in August of 2018. Prior to CBI, he was the Ritual Director at Park Avenue Synagogue on the Upper East Side of Manhattan for five years, where he did everything from leading prayer services to teaching adult education. He also taught the Derekh Torah course at the 92Y during this period.

Rabbi Lebovic has the unique experience of growing up and being educated in the Orthodox world of intense Jewish scholarship and observance, and also working in the more liberal denominations of Conservative, Reform, and Renewal Judaism. He tries to bring that eclectic spirit to his pulpit and interactions with other Jews and believes that all are essentially trying to get to the same place, but that they all do it at their own pace. He tries to meet each person where they are, and to assist them in their individual spiritual quest.

He started his Jewish studies very early in his life, and studied many of the Jewish Classic texts intensely until his mid-twenties. Concurrently and subsequently, he also studied for a B.A. in psychology and Judaic studies at Touro College (2004) and then received an M.S. in journalism from Columbia University in 2006. He has worked in journalism at several national publications and in PR/marketing at Jewish National Fund. He has also studied acting and improv at several leading schools in New York City, including Terry Knickerbocker Studio, The PIT, and Gotham City Improv.

He has traveled widely in various Rabbinical roles to assist Jewish communities (some highlights are Russia; Australia; England; and Slovakia), and spent two summers visiting Jewish inmates in prisons across the United States.

Rabbi Lebovic studied for the majority of his Rabbinical studies in an Orthodox rabbinical program in Melbourne, Australia, and completed it and received his ordination from the Rabbinical Academy of Mesifta Adas Wolkowitz in NY. He is a member of the OHALAH Association of Rabbis.